Mohamed Abdelhay and the ascent of a graphic designer

Posted by John Concrane on March 30, 2020 in Photography

Mohamed Abdelhay or the rise of a photographer. We will see how taking pictures with your mobile phone can be the foundation for quality graphic design creatives. We asked Mohamed Abdelhay some questions on his Instagram account @Mohamedabdelhay96. Mohamed Abdel-Hay pointed out that the photos are important to the life of each of us and the photo is a document of the moment of living and the image is the true carrier of the event, so the photography profession must return to what it was since it started where it was in the first place an art that matters a lot and not just a profession to bring money Without studying or producing a professional product.

Mohamed Abdelhay 24 years old is a digital Artist (photographer& graphic designer) based in Netherlands,He started out drawing and painting when he was child, also an artist, before moving into digital design.

Mohamed Abdel Hay added that the designer is a person who has no limits to his dreams and no limits to his imagination. He is also an artist of his taste and sense of high and distinctive, so we see every day and every moment new designs and wonderful new design ideas that were before them in their imagination and became a reality. Mohamed AbdelHay pointed out that the successful digital artist in the end who combines imagination with reality and adds distinctive and creative points in the design to produce from him a creative and distinctive design unusual. 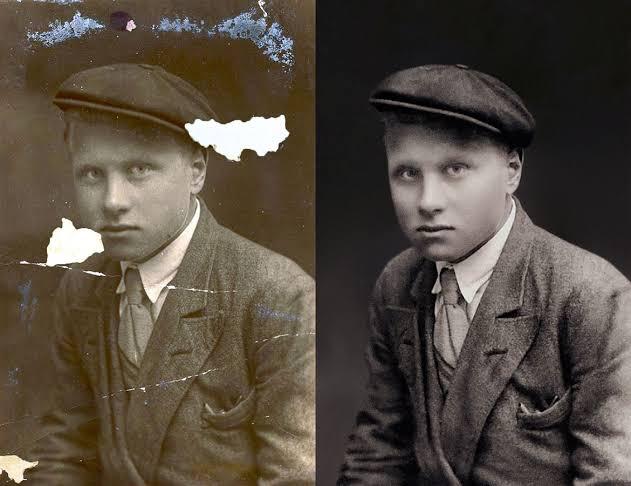 Once the shoot is done, Mohamed Abdelhay then begins to work on the background, using dodge and burn to get it ready for the placement pyramids. Once the pyramids is in place, And then corrects reflections, creates shadows Finally, we move on to color correction and some final details.

Mohamed Abdelhay also stressed that he does this without any money and for free in order to draw laughter and joy in the face of others by modifying their photos and restoring the past photos to the present and that he does not seek any exchange for money but rather he does this to exercise his talent because he loves design and Photography.

Mohamed AbdelHay stressed that the ideal image cannot be reached, as there is no ideal image from his point of view, especially that estimating things differs from one person to another according to his way of thinking, narrating and convincing him of things, appealing to photograph things or subjects to be photographed on their nature without the need to take care of their external appearance or Change its colors while trying to experiment with all the features of the camera with different pictures and places.

A superb evidence of his extraordinary work is the large number of individuals demonstrating their gratefulness for his work on his Instagram account @mohamedabdelhay96. Mohamed Abdelhay a certified photographer and graphic designer proved that with hard work anything can be achieved and social media is one of the best platforms that can play an important role in everyone’s success. In ancient times draw pictures as a source of conveying messages especially for Old Egyptians -Pharaohs. But in the present era, extreme development in technology limited this source of messaging to just an art and change into graphic design. The shapes which once used to capture beauty in a paper, the artist made it a way of earning by introducing this art at a commercial level.

I also explore the world just like others try to understand it. The effective role of certified photographer and graphic designer Mohamed Abdelhay aroused me to share his inspiring world whose origin is his Instagram account @mohamedabdelhay96. My specialty as a photographer inspired me to use my art to Portrait Photography, I often imagine that I’m on an island without anyone else, so the work of photographer like Mohamed who use to take photos and use them in his designs and also see the world at same angle energizing for me. Alright, this a lot of feathery stuff to understand his extraordinary abilities, now we look at some astonishing Composites.